Financial Markets continued to rebound nicely in May as economies around the globe started to reopen.  There were also constructive news headlines related to effective coronavirus therapies and positive data on some early-stage results for COVID-19 vaccines that added to the bounce. Central Bank policy was little changed over the month. Still, bank officials were often on the podium, reiterating their prior policy initiatives and reassuring markets that they would continue to act if needed.  Earnings announcements for Q1 continued throughout the month, while economic data started to paint the damage already done to the global economies. In the US, the S&P 500 gained 4.53% for the month, the Dow increased by 4.26%, the technology-heavy NASDAQ led gainers with a return of 6.75%, and the small-cap Russell 2000 inked a 6.36% gain.

International developed and emerging market stocks also did quite well with gains of 5.43% and 5.87%, respectively.  Fixed income markets were also generally higher, but returns were widely different across the debt spectrum.  Emerging market bonds outperformed with a gain of 5.87%.  US high yield and investment-grade corporates increased by 2.47% and 2.21%, respectively.  The US yield curve was rather quiet with the 2-year note yield falling three basis points to close at .15% while the 10-year bond yield increased by three basis points to close at .65%.  Gold prices rose 3.5% or $57.60 to close at $1751.40 an OZ.  Oil was the big winner in the month after a historic move into negative territory in April.  WTI increased over 90% to close at $35.33 a barrel. 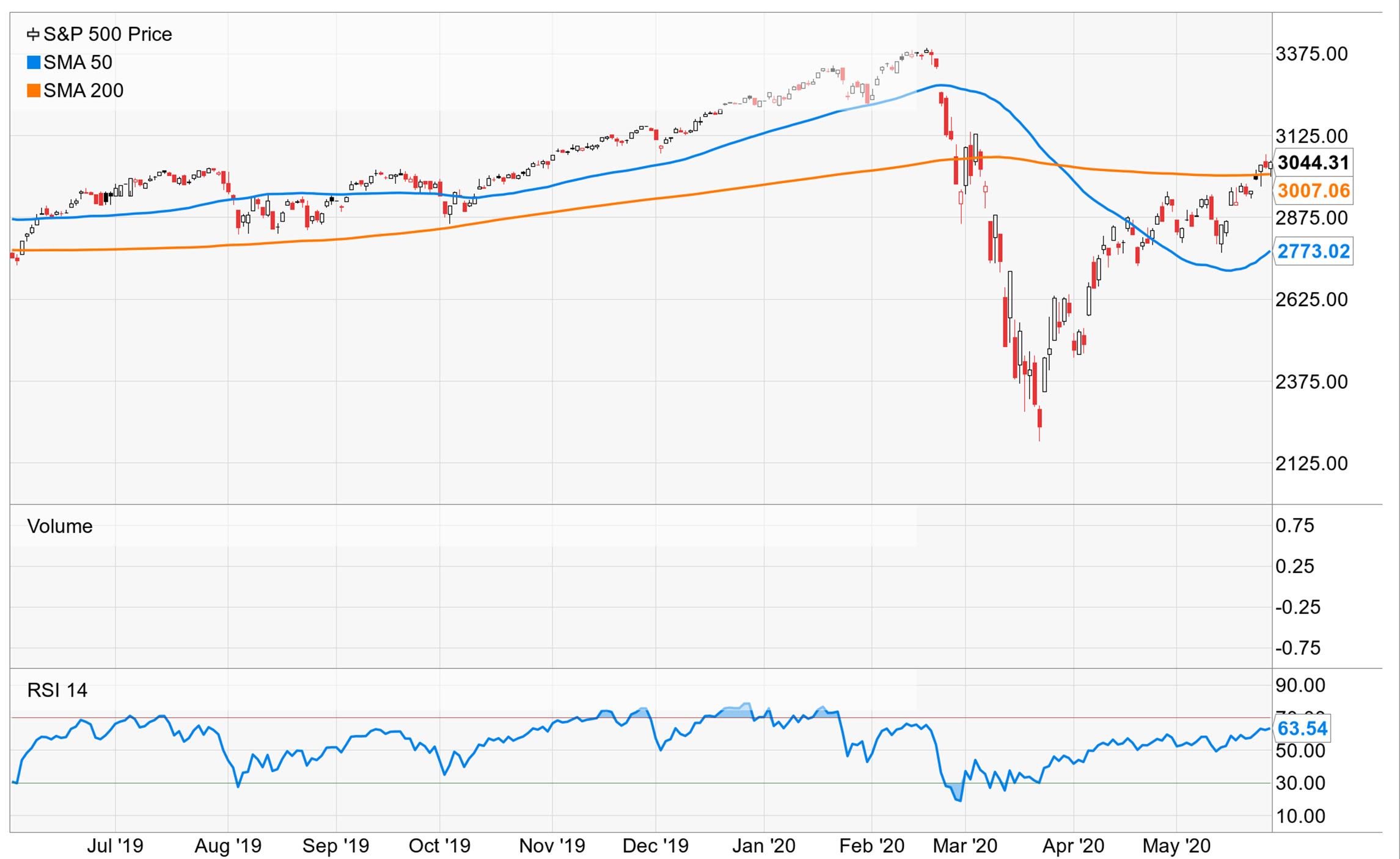 Countries around the globe tentatively started to lift shelter in place orders and reopen their economies. By the end of May, all states in the US had opened albeit in many different capacities depending on the geography.  Optimism around the reopening stoked sentiment that the worst may well be behind us.  Memorial Day celebrations seemed to confirm that many wanted to get back to work and everyday life despite infection rates continuing to climb in some places.  Gilead Science’s drug Remdesvir showed promise as a therapy against COVID-19, although the test population was rather small.  Additionally, Phase 1 results out of Moderna’s vaccine were also encouraging – both announcements fostered positive sentiment into the market’s recovery.  Currently, there are over 100 vaccine candidates and numerous therapies being tested to combat the virus. 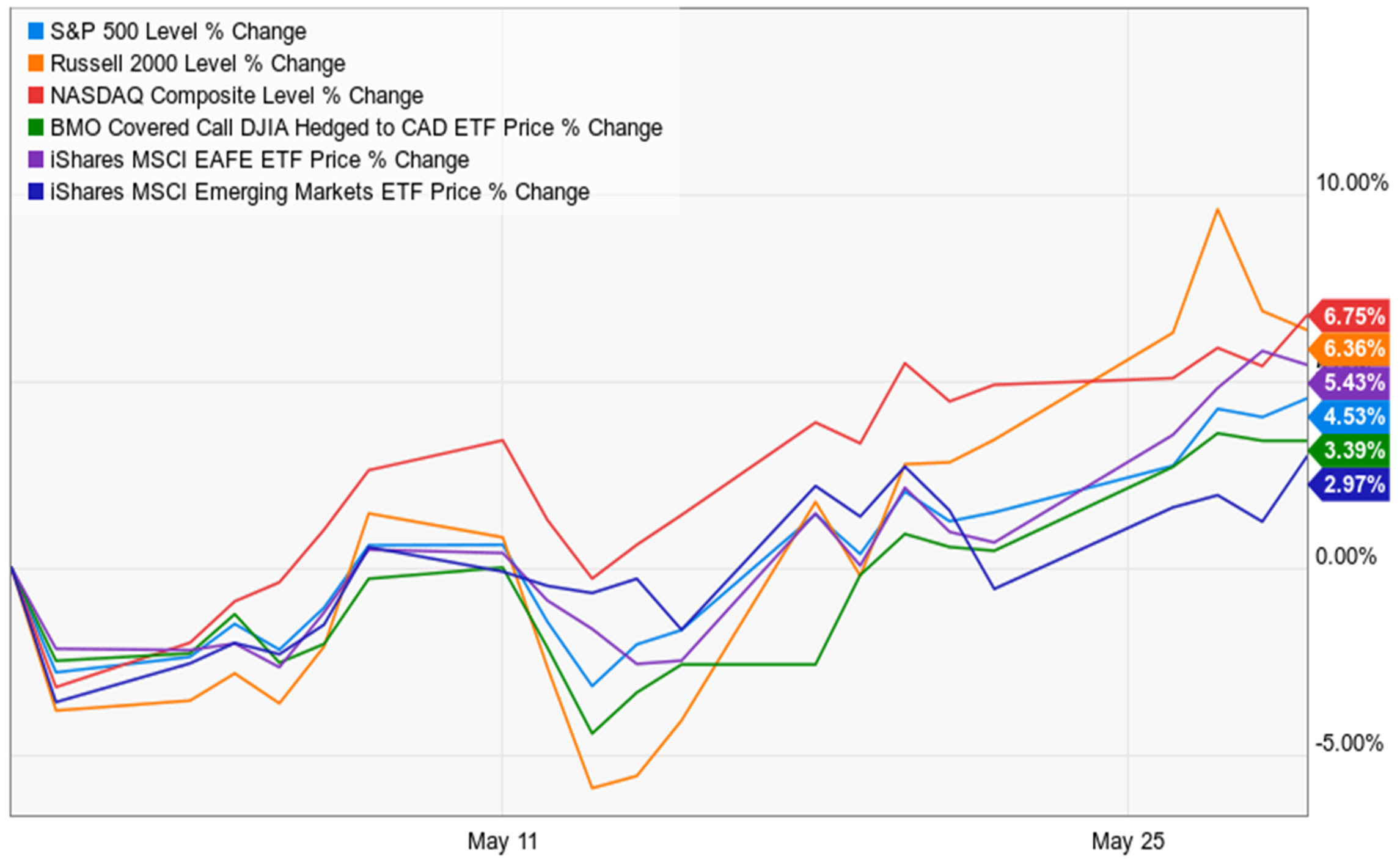 Central bank policy was little changed in May. Much of the hard lifting had been done by the US Federal Reserve in March and April when it had essentially gone all in to keep markets liquid and pledged to do whatever it took to stimulate the economy.  In Europe, the ECB continued its quantitative easing program and introduced a 750 billion dollar borrowing facility that would provide grants and loans to its member states with the most need.  Federal Reserve Jerome Powell push back on the use of negative interest rates in the future. In contrast, rates in the Eurozone, the UK, and Japan continued to trade in negative territory.  The historic policy response has been massive and needed as we assess the damage done to the global economy.  Economic data in the US in May continued to show colossal job losses, with the unemployment rate climbing to 14.9%.  The number of individuals applying for unemployment surpassed 30 million.  Non-Farm Payrolls decreased by 20.5 million in April.  ISM manufacturing and services both continued to point to contraction.  Retail Sales plummeted, falling over 16.4% in April.  You get the idea- the markets, however, looked past much of the ugly data in hopes that the worst has passed, and as the economy reopens, these numbers will begin to improve.

Q1 earnings showed that the economy was on solid footing before the virus hit.  However, according to FactSet data, only 64% of companies reported an upside earnings surprise- the lowest percentage since Q4 of 2012.  Earnings growth on a blended basis declined -14.6%, the largest year over year decline.

The information in this Market Commentary is for general informational and educational purposes only. Unless otherwise stated, all information and opinion contained in these materials were produced by Foundations Investment Advisers, LLC (“FIA”) and other publicly available sources believed to be accurate and reliable.  No representations are made by FIA or its affiliates as to the informational accuracy or completeness.  All information or ideas provided should be discussed in detail with an advisor, accountant or legal counsel prior to implementation. No party, including but not limited to, FIA and its affiliates, assumes liability for any loss or damage resulting from errors or omissions or reliance on or use of this material.

The views and opinions expressed are those of the authors do not necessarily reflect the official policy or position of FIA or its affiliates.  Information presented is believed to be current, but may change at any time and without notice.  It should not be viewed as personalized investment advice. All expressions of opinion reflect the judgment of the authors on the date of publication and may change in response to market conditions. Due to rapidly changing market conditions and the complexity of investment decisions, supplemental information and other sources may be required to make informed investment decisions based on your individual investment objectives and suitability specifications. You should consult with a professional advisor before implementing any strategies discussed. Content should not be viewed as an offer to buy or sell any of the securities mentioned or as legal or tax advice. You should always consult an attorney or tax professional regarding your specific legal or tax situation. Investment advisory services are offered through Foundations Investment Advisors, LLC, an SEC registered investment adviser.